Rick Owens titled his FW '19-'20 collection "LARRY." Shown at Paris Fashion Week, he explained that his inspiration was Larry LeGaspi, a designer and rock and roll costumer. In fact, Owens has been working on a book about LeGaspi for a few years now and it will be released through Rizzoli in October, at the time this collection will be available for purchase.

Owens told fashion journalist Luke Leitch, "For me, as a teenager growing up in Porterville, California, what Larry LeGaspi did was a huge thing—the way he infiltrated middle America with this subversive sensibility. He started out kind of inventing LaBelle’s look [around 1973]. Then Kiss took LaBelle’s look. He did stuff for Kiss [1974–1978] and then Grace Jones, Divine . . . So at the very beginning, he created that silver and black sleazy ’70s thing, to my eyes a combination of Art Deco and campy sci-fi. In fact, I found out later he was into the same sci-fi I was—the 1930s film of "The Shape of Things to Come," which kind of defined what "The Jetsons" did later. And Larry LeGaspi took it, too... He comes in and takes that and somehow, he connects with soul culture—black soul culture and music—with LaBelle. So that combination is already kind of a surprise, and then, with Kiss, he takes it into mainstream America, high school kids. And Kiss turns it into commedia dell’arte, kabuki, Greek tragedy masks . . . they add sex, lust, and vice. So all of this stuff coming together was very important to this kid in Porterville."

Because I am a man d'un age certain, I clearly recall Labelle and their larger-than-life costumes and of course the mega-band KISS with their larger-than-larger-than-life costumes! So of course the black and silver of KISS shows up in this collection along with some of the saturated jewel tones of LeGaspi's other creations. But Owens is a master for a reason: he does not imitate LeGaspi. He interprets LeGaspi through the Owens lens, so it feels referential but also totally unique since Owens has such a particular, defined vernacular. Kimono-like cuts, asymmetrical puffy coats, wide legged trousers, and the marvelous almost-ecclesiastical styling of an Owens ensemble (new: saddle bag pockets on the sides of overcoats!) are rendered in his unmistakable hand. But we need to take a moment to acknowledge the thoroughly incredible platform boot shown on these models. I am already pining for a pair. 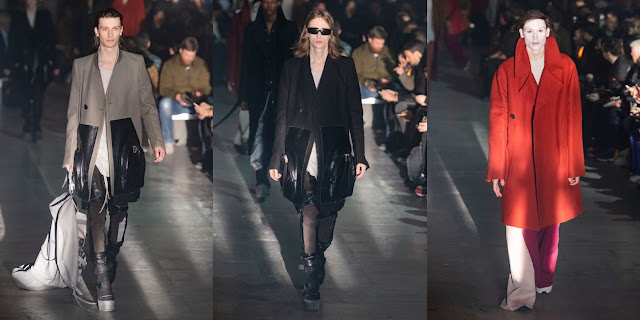