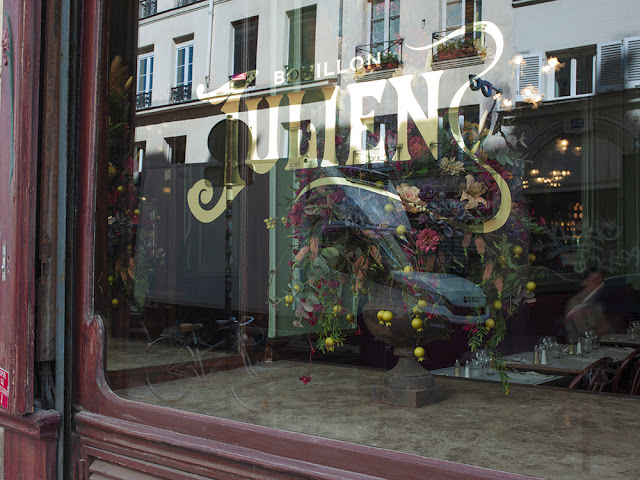 From the restaurant's website:
"Bouillon Julien is one of the most beautiful restaurants in Paris, if not the world. It remains one of the best preserved examples of the Art Nouveau style. Over the years, it has been the favoured haunt of many well-known cultural figures. Edith Piaf and her lover, Marcel Cerdan, the champion boxer, would frequently dine at ‘table n. 24’.

The building was constructed in 1906 by the French architect Edouard Fournier and was decorated by a number of exceptional artisans working in the Art Nouveau style. Armand Segaud created the peacock panels, while the mahogany bar is attributed to famed ‘Ecole de Nancy’ woodworker Louis Majorelle.

Louis Trezel, inspired by the iconography of Alfons Mucha, designed the nymphs in the four painted molten glass panels, each evoking one of the four seasons. Hippolyte Boulanger devised the floor tile pattern of geraniums and daisies (from his Paris workshop in the neighbourhood). And Julien Barbarin, who had inherited the institution from his uncle, Monsieur Fournier, had the ceiling installed with stained glass designed by Charles Buffet (the father of renowned painter Bernard Buffet) and crafted by the celebrated glass atelier of Georges Guenne.

In 2018, The Guild of Saint Luke led by British designer John Whelan were comissioned to renovate Bouillon Julien to its former glory. During the initial research phase, they made a fascinating discovery. A stratigraphy of Julien’s wall paint confirmed that the original wall colour in 1906 was in fact sea green, not tobacco as it had been for decades. Years of indoor smoking had obscured the original colour to the point of being forgotten, since no photographic evidence could prove the contrary. Julien has now been repainted in this resplendent sea green, a signature colour of the Art Nouveau movement that looked to oriental pottery painted this colour for inspiration. The effect is breathtaking. The colours found in the stained glass and decorative panels finally make sense, as the colour scheme now truly reflects what the brilliant designers of the age intended.

Despite having operated as a brasserie for many years, Julien was created as a ‘bouillon’ in 1906. In 2018, it has reverted to being a ‘bouillon’ once more.

A ‘bouillon’ is a restaurant first created in the late 19th and early 20th centuries serving traditional French cuisine, in particular a ‘bouillon’ (broth). The particuliarity of the ‘bouillon’ was to serve good quality food at affordable prices. In 1900, nearly two hundred and fifty bouillons could be found in Paris. Today, Julien is one of only a small handful of authentic restaurants of this kind that remain in the French capital." 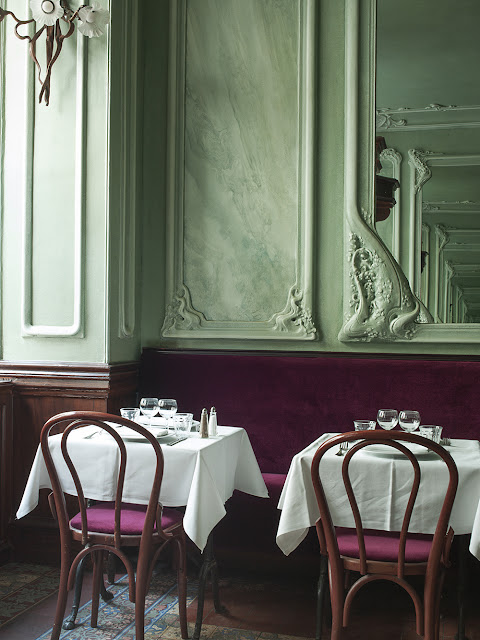 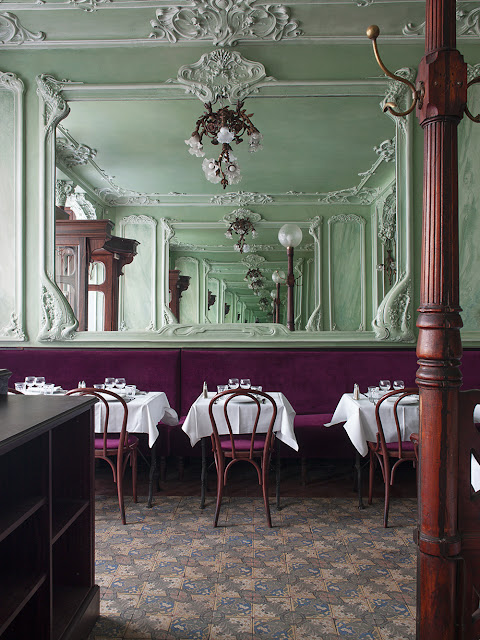 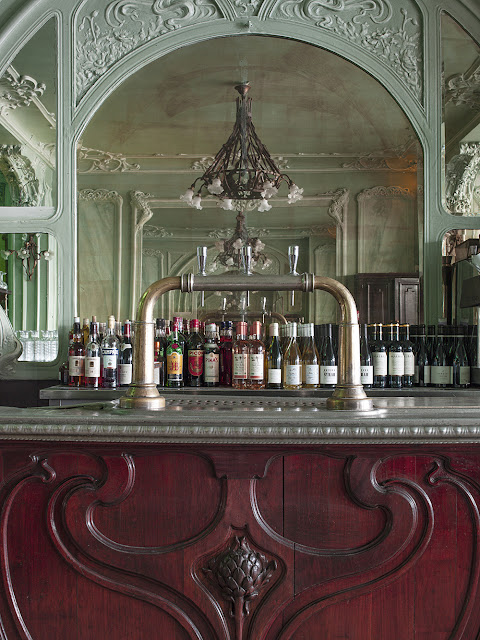 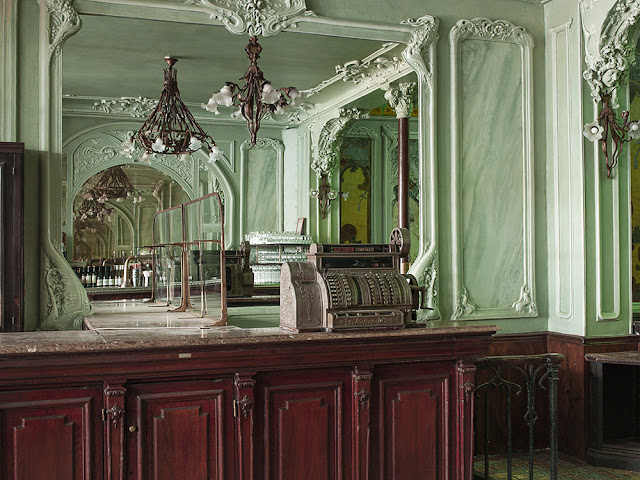 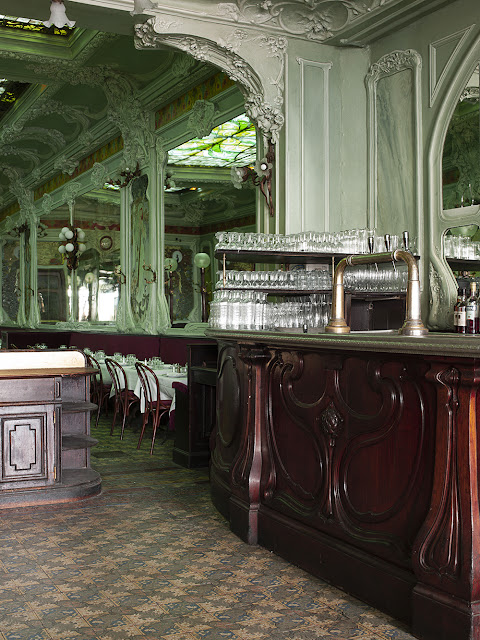 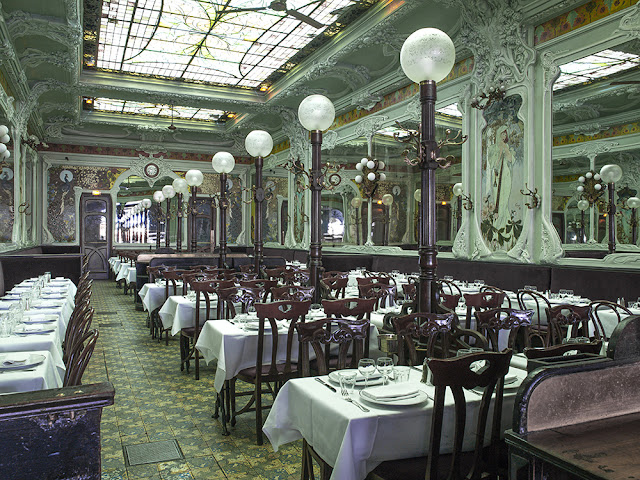 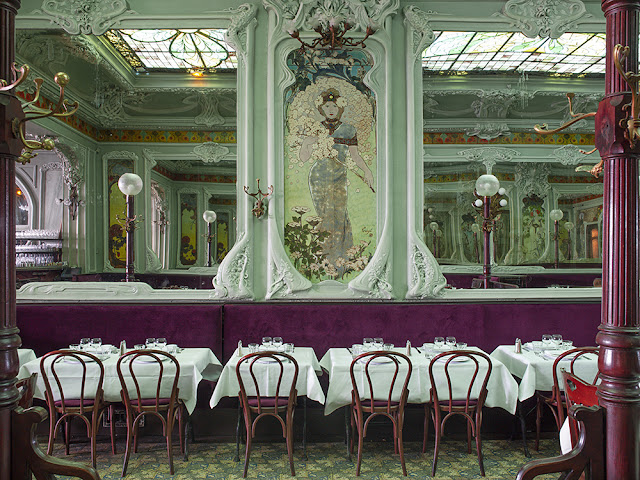 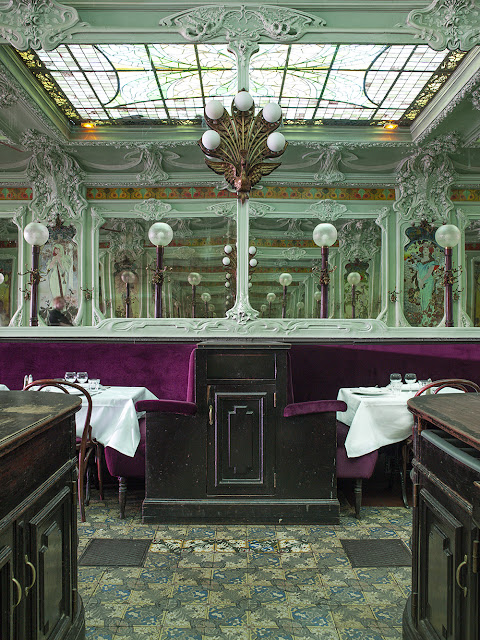 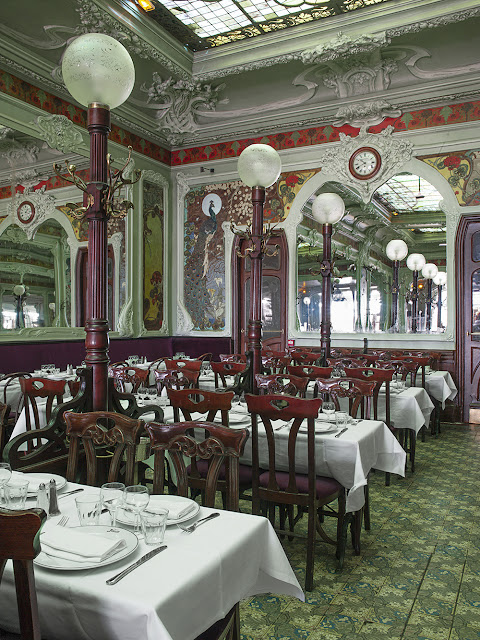 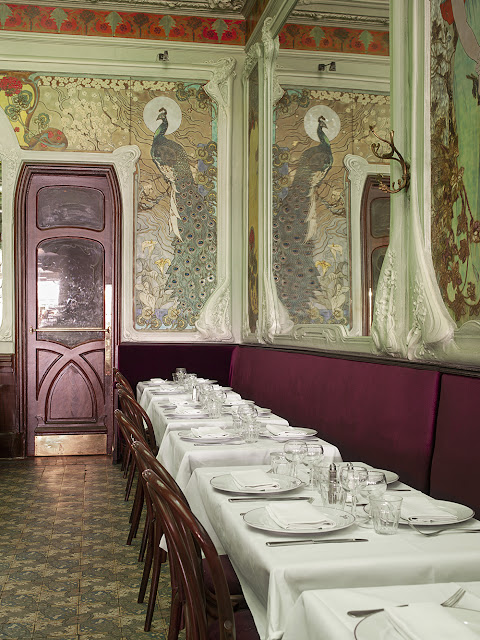 And look at the other restorations of historic brasseries done by John Whelan! They're gorgeous.
https://www.gsl.works/
Posted by Jeff at 7:00 AM