...the powerful All The Light We Cannot See by Anthony Doerr which won the 2015 Pulitzer Prize for Fiction and the 2015 Andrew Carnegie Medal for Excellence in Fiction. 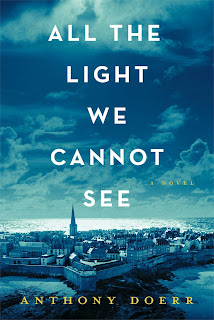 A good friend and I have started our own two-person book club since we have challenging schedules and busy lives--two of us seems more manageable than a whole gaggle. We read, we email our thoughts as we progress through the book, and then we meet for a lunch (or several!) to discuss. For our current book, she suggested Doerr's novel All The Light We Cannot See. I had not heard anything about the subject of the book, so I dove in.

Ostensibly, we follow two separate plot lines: 1) a young blind girl, Marie-Laure and her father who are forced to flee Paris when the Nazis come, and 2) Werner, a young German orphan whose only love is science and who, for that very reason, gets snapped up by the Nazi party to work on radios. I must say that when I started the book, I was a tiny bit reticent since this is very familiar territory. There have been so many books, films, and plays about WWII that it almost seems--and I do not mean this disrespectfully to those and their descendants who were destroyed or touched by the war--that there is a little bit of a saturation point on the subject. This has nothing to do with the subject of the war itself but the way it is appropriated and packaged for sale by industries, especially Hollywood. But it only took a few chapters to see that this story may take place during WWII but is actually about so much more. It is effective, especially with a war that is still fairly recent and that still gets a lot of cultural coverage, to tell it from a smaller point of view, from the perspective of two children. It's always more effective to tell grand stories from smaller points of view: HISTORY when told as such is HISTORY, but when it is an individual, it is of course easier to identify with, to see the impact on actual lives. But if our protagonists are kids, as they are here, it is all the more effective since war is generally, on a psychic level, incomprehensible--and it is certainly incomprehensible to children. And the sad part is that we watch them come to comprehend what it all is, as the daily details of war tighten into them, making notches, taking from them their childhood.

Through the many years of WWII, our children, for various reasons, end up in the French coastal town of Saint Malo for the cataclysmic siege the city suffered in August and September of 1944 at the hands of American bombs and British gunfire. Some critics have suggested that it is obvious that these two will eventually meet and that the device is predictable, even hackneyed. But I did not see it that way and to those critics I say you are not looking at it the right way--you are hobbled by a linear point of view. The story itself is told not in chronological order. We hop back and forth between their childhood, the start of the war, the siege, the middle of the war, back and forth, circling the events through time. I felt that it was more about following the thread backward--the two meet, yes, but what are the incredible, improbable, heartbreaking, and sometimes joyous paths that lead to such a meeting? I often contemplate this idea in my own life by looking at a meeting with someone or a particular event and tracing it back. I'm sure we've all done this in our imaginations: if I hadn't gone to _____ or known _____ then I would never have gotten here, now. Our lives are a connected chain of such what ifs. So for me, it was not so much that it was "inevitable" that they meet but that, at a certain point in the time stream, they did meet. Now, let's examine how and why that happened. All time is simultaneous. When you stand outside of it, you can observe from any angle, and such an approach is cosmically thrilling.

There is a marvelous juxtaposition between the literary and the cinematic in Doerr's writing. His style is certainly literary--but in a powerfully simple, straightforward way. It is not florid writing. Author JR Moehringer says, "Anthony Doerr sees the world as a scientist, but feels it as a poet." And this is true. While stunningly poetical (often breathtakingly so), it is completely direct and this helps the swift pacing. The entire novel is composed of short chapters that act as quick cuts in a film which is unexpected by ultimately pleasing. It brings a compelling rhythm to the story. If it were a film, such little bursts of story, flitting back and forth, would bring a lot of very effective tension. And it is the same in the book, back and forth, back and forth, not only with time as I have mentioned, but with location and character. We are sort of breathlessly putting together the puzzle of this story. His directness also plays up the completely heartbreaking aspects of everything happening to and around these kids. I confess that, as a writer, I might have been tempted to find adjectives that would describe heartbreak and misery and fear, to try to describe all of that and GIVE it to the reader...but that would have been the wrong approach. It is enough to see these children in this situation. The rest happens in our hearts.

There is some lovely poetry in the title too: "the light we cannot see" being Marie's blindness and by implication, how she maneuvers in her world of darkness (there are some gorgeous passages from her point of view, encountering natural elements) but also how Werner learned about the invisible world around him. He loved that the air is filled with wavelengths, infrared light, ultraviolet light, and especially invisible radio waves, all this static that is in the air every second. And then there is all the lightness we can't see while things are so dark and horrible...where is the lightness of the world when such a war rages? Where is joy when people can be so deliberately cruel and monstrous, when Germans wanted so to punish, to destroy, so full of anger at the entire world. It reminds me of certain quarters of this country today where people are SO angry and want to lash out to hurt and destroy...all the leftovers from the Tea Party and evangelicals with their twisted, aimless fury, lips curled in a snarl and veins bulging in their necks. The target of such rage does not matter. There is also the abstract idea of the light we cannot see being those invisible paths and threads that lead us forward, to a meeting with a special person, to a place that becomes a part of us.

And finally, I will say that I love how science is presented, as something real, important, powerful...more powerful than politics or petty hatred. It can be used by anyone and everyone, it does not play favorites or take sides. Science exists above and beyond--or rather the objects of science, the radio waves, wavelengths, electricity, magnetism. These things exist whether there are Nazis or not, whether evangelicals deny them or not. There is a purity to it. I like that Werner strives for that, and his allegiance is to a truth that is actual and exists no matter what, no matter if it is believed in or not. And Marie-Laure loves the natural world, the scientific aspect of zoology and marine life and shells and phytology and botany. The way that both of these kids look up to this system of recognizing and understanding the world around them is beautiful and frankly refreshing, and this leads me to reflect on our current time, here and now (shouldn't good art do that? make one think about one's own life and time?). I lament the anti-science movement in this country, the anti-vaxxers, the evangelicals who think that the world is only 4,000 years old and that fossils are decoys planted by Satan to detract from "God's word." Thankfully we have people like Bill Nye and Neil Degrasse Tyson who are champions of the sciences, but come on, we should not have to have someone to "champion" science. It should--and IS--self evident. But only if one is not blinded by religious superstition. So, it's lovely to see science portrayed as something NOT up for debate, something that is granted, something that is a given...

Recommend? YES. It is a beautiful, fulfilling achievement of literature, but also philosophy and spirituality. There are a few passages toward the end that deal with the enormity of life and this reality in a concise but jaw-dropping way. It didn't win a Pulitzer for nothing...

http://www.anthonydoerr.com/books/all-the-light-we-cannot-see/
Posted by Jeff at 7:00 AM