...DEAD IN THE FAMILY, the tenth novel in the Sookie Stackhouse series, by Charlaine Harris. 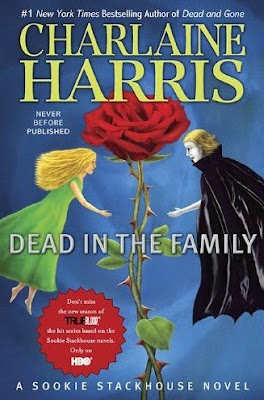 Thankfully, I started reading Charlaine Harris’ Sookie Stackhouse series before HBO premiered its hit show "True Blood," based on the very same books. In case you have been living under a rock, this story about a telepathic human girl (Sookie) and vampires in rural Bon Temps, Louisiana has been a runaway hit for HBO. Created by Alan Ball (he of the amazing "Six Feet Under," one of the best things on television ever), it brings to life all of the characters and situations in the Harris novels—and then some. But what the televised series doesn’t capture is the detective novel-feel of the books. Sookie may be telepathic, and there may be vampires, werewolves, shape shifters, witches, fairies and demons but ultimately, each book starts with some kind of whodunit that requires Sookie to use her powers and wits, along with help from her supernatural allies, to figure out.

Having said that, as the novels have progressed, the story has too. We have learned more and more about Sookie’s family origins, and relationships with vampires and werewolves have deepened and become more complicated so that the whodunit element has been moved to the back burner. Now Sookie must find out who is planning on doing something… to her. There is still a light element, almost kitschy (which is certainly part of the charm of the series), but this novel feels much more serious than any preceding it. It feels like the middle book of a trilogy where the plot has been set up, and now we have to delve into the how and why before we reach the final installment. Contributing to the heavier feel is the development of Sookie herself who has evolved from an outwardly happy-go-lucky Southern gal to someone with figurative and literal battle scars, and most likely some Post Traumatic Stress symptoms.

Recommend? Absolutely. And just like the Harry Dresden series I reviewed here, you really have to start at the beginning to learn all about the major players (those still in the series but especially those who have passed on) and what has happened. But don’t worry: it is fast reading. You’ll be caught up in no time. It’s tremendous fun!

http://www.charlaineharris.com/
Posted by Jeff at 2:56 PM