I am a little heartsick about Pete dropping out, but this wonderful article by Frank Bruni at the NY Times sums it all up.


Mayor Pete Flew Sky High
The youngest of the Democratic candidates did the grown-up thing, and dropped out.
By Frank Bruni
Opinion Columnist

To Pete Buttigieg’s many other virtues, add these: He’s not delusional, and he can see beyond himself. 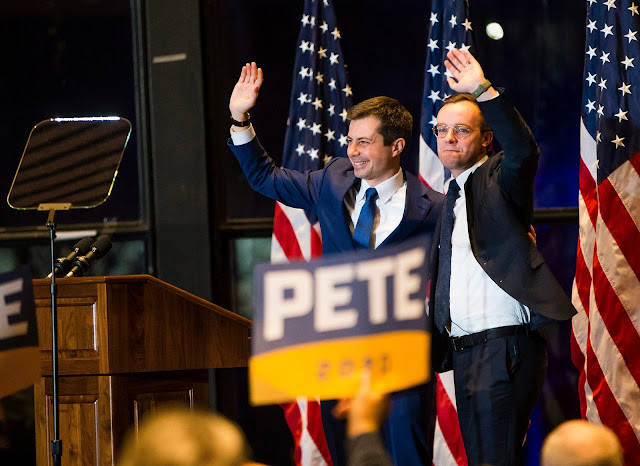 He looked at what happened in South Carolina on Saturday. He looked at what was likely to happen in the many states that will vote on Tuesday. And he recognized that he had no path to the Democratic presidential nomination and that staying in the race would probably help Bernie Sanders, the rival he had branded a dangerous nominee.

So on Sunday he got out. Just like that. No praying for a miracle. No waiting too long. No protracted melodrama or slow-building drum roll of hints. No, the youngest of the Democratic aspirants did the grown-up thing.

I can only imagine how bitter that felt, given how high he had flown. And I can only hope that he and the rest of us never minimize that altitude.

But no other Democrat will be able to claim a more surprising, disarming showing in 2020 than Buttigieg can. After the first two contests, in Iowa and New Hampshire, he had more delegates than anyone. He finished in the top four in all of the first four states to vote.

That was despite the fact that he’s married to another man. For many Democrats Buttigieg’s sexual orientation made him a trailblazer and was cause for excitement, but for others it made him a risk and was cause to turn away. The degree of success that he nonetheless enjoyed reflected his ability to rise above stereotypes, to soar above identity politics and to pull voters up with him.

Buttigieg was the first major openly gay presidential candidate, and he challenged and changed Americans’ preconceptions of what such a candidacy would look like, as I wrote in a column just before the Iowa caucuses. One of the wonders of his unprecedented campaign was how little his sexual orientation was talked about as his bid progressed. That spoke to the range of political talents he brought to the contest and the breadth of the issues he engaged. He was a novelty who resisted being just that, a symbol who wouldn’t be content with mere symbolism.

Rush Limbaugh, to whom Trump awarded the Presidential Medal of Freedom in January, was more deviation than norm when he gawked at the hypothetical scenario of Buttigieg, as the Democratic nominee, “kissing his husband onstage next to Mr. Man Donald Trump.” Mr. Man? In a Buttigieg-Trump face-off, only one face would glow oddly orange, and only one head of hair would appear to be the work of a dozen tipsy sprites.

While some of his critics on the left conducted an offensive discussion about whether he was gay enough, he performed an important balancing act, integrating his gayness into his candidacy without letting his candidacy be defined by it, seizing teachable moments without ever becoming tendentious or tedious, showing the world that being gay or lesbian or bisexual or transgender or queer is an essential part of who we L.G.B.T.Q. people are but not all of who we are.

On Sunday night in South Bend, where he delivered a poignant valediction to his campaign before hundreds of cheering supporters, he noted that it had “sent a message to every kid out there wondering if whatever marks them out as different means they are somehow destined to be less than.” They could look at him, he added, “and see that someone who once felt that exact same way can become a leading American presidential candidate with his husband at his side.”

He was talking about the experience of being in a minority and being marginalized — about the sorrow and the fear — and one of the great disappointments of his candidacy was his inability to build a bridge between himself and others who have had that experience. He was getting better and better at it, though. He was ever more attentive to that crucial task — in his last debate, for example, and in his speech on Sunday night.

I listened to it and realized that what most impresses me about him isn’t his intellect per se — the fancy degrees he has, all the languages he speaks — or his crazy poise or the manner in which he handled the unconventional aspects of his candidacy.

It’s his thoughtfulness. I first met him in 2016, when I traveled to South Bend and spent half a dozen hours over two days in his company, and I remember being struck above all by how deeply he had examined and how carefully he spoke about issues like freedom, globalization, automation. He was a walking tutorial, and a sweetly earnest one at that. I wondered then if he could upsize that trait for a presidential campaign. Over the past year, I — and the rest of America — got the answer.

Sure, he turned prickly and even somewhat overbearing at times during the most recent debates, taunting Sanders, talking over him and trying to break through beyond Iowa and New Hampshire as the clock ticked down. But still he wrestled eloquently with the meanings of things.

I think that’s why my inbox was so crowded on Sunday night and Monday morning with emails from admirers of Buttigieg’s and by their expressions of regret. One email came from my friend Bob Kerrey, the former governor and senator from Nebraska and a onetime Democratic presidential candidate himself. He shared with me the daily reflection on events in the news that he writes to his teenage son. Monday’s was about Buttigieg.

“I do not think my support of Pete would have enabled him to win,” he added. But, he wrote, “It would have made me feel a little better about his loss this morning. Americans have missed an opportunity to turn the page to a much different future. We should feel remorse at losing that future.”

On Sunday night Buttigieg said: “Politics at its worst is ugly. But at its best, politics can lift us up. It is not just policymaking. It is moral. It is soul craft.” At his best, Buttigieg demonstrated that.

He has an opportunity over the coming months to demonstrate it further. “I will do everything in my power,” he said, “to make sure we have a new Democratic president come January.”

Mayor Pete, I’m holding you to that. We all are. Because your power is remarkable.


Yes, I agree...his power is remarkable. And when I got on the Pete train, I vowed that I would ride it as far as we could make it go. But if it could not reach the White House, I always said that Pete is young, and he has a whole political career ahead of him. Governor, Senator, Congressman, and yes, another run at the White House! Potential and possibilities, that is all he has ahead of him.

I thank you too, Pete...now run for something else, because you will make a difference, even more than you already have!

Link to original article:
https://www.nytimes.com/2020/03/01/opinion/Pete-Buttigieg-speech.html
Posted by Jeff at 7:30 AM