...another film from another one of my favorite directors: "Eisenstein in Guanajuato" by Peter Greenaway. 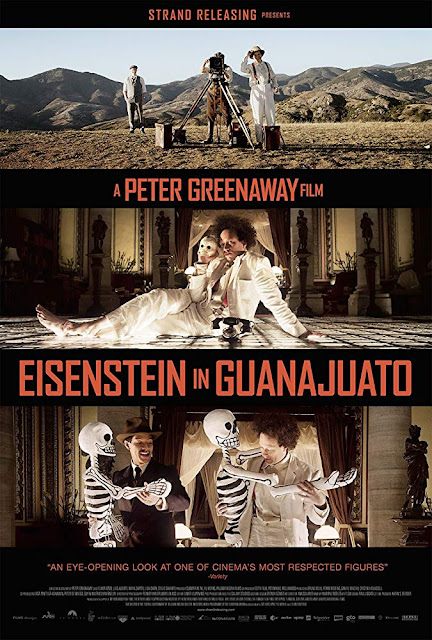 Controversial auteur director Peter Greenaway (you either love his work or hate it) added another installation to his ongoing series of biographical films about the lives of famous artists. In 2007, he made "Nightwatching," a film that explored possible nefarious circumstances surrounding Rembrandt's creation of his famous The Night Watch, followed by 2012's "Goltzius and the Pelican Company" about Hendrik Goltzius, a late 16th-century Dutch printer and engraver of erotic prints. And released this year is "Walking To Paris" about sculptor Constantin Brâncuși walking from Bucharest to Paris in 1903-04. But in the meanwhile, Greenaway took a detour to make a biographical film about another type of visual artist--a film director.

The director in question in "Eisenstein In Guanajuato" is Sergei Eisenstein, one of the most influential Soviet filmmakers who created "Battleship Potemkin" with its famous--infamous?--baby carriage-down-The-Odessa-steps scene, and "October: Ten Days That Shook the World" about the Russian revolution. After only ever living and working in Russia under pressure to create propagandist cinema that adhered to the world-view of the Soviets, he secured a trip to Mexico ostensibly to make a film, "¡Que viva México!," about Mexico's history up to their own revolution. Based on facts, Greenaway shows us how this trip opened Eisenstein to other ways ways of thinking, feeling, and creating. Eisenstein was by accounts bisexual, but there is some evidence that on this trip, Eisenstein had his first gay sexual relationship with his cultural guide, Palomino Cañedo. It is this event that is central to Greenaway's film in which he imagines Eisenstein saying these were "10 days that shook Eisenstein." 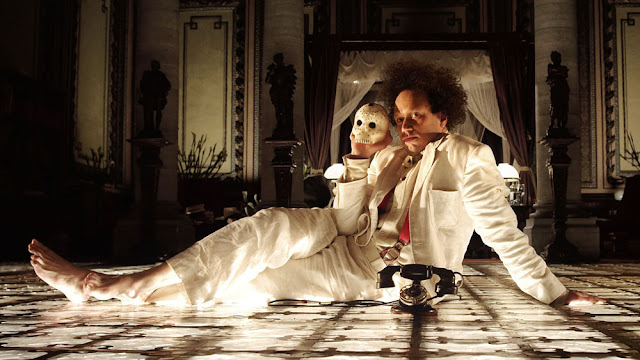 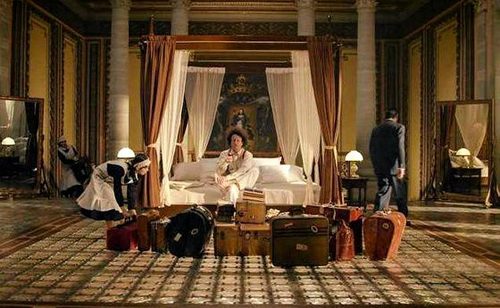 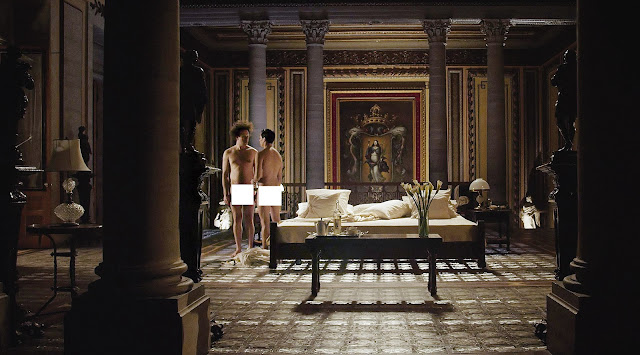 Greenaway's films have always been jaw-dropping creations of painterly composition and Baroque texture, highly stylized with color and neo-classical form (Greenaway trained as a painter before becoming a filmmaker and it shows). Subject matter is always steeped in the the messy, visceral qualities of life on this plane, including birth, eating, sex, and death. And while "Eisenstien in Guanajuato" has its share of sex and nudity (we get the chance to truly study lead actor Elmer Bäck's hooded penis), for the most part, Greenaway lets the backdrop of colonial Mexico do the Baroque talking for him and it is a wise choice...the scenes in Eisnstein's "hotel" were actually filmed at the sumptuous Teatro Juarez in Guanajuato. I also very much appreciate that, while we see aspects of traditional Mexican culture including Día de los Muertos, Greenaway shuns Mexican clichés. There are also some wonderful camera tricks having to do with perspective and space that pop up here and there. And the whole experience is rounded out with a soundtrack almost exclusively--and fittingly--featuring Prokofiev.

And as Eisenstein, Elmer Bäck is indefatigable and delightful, giving us a fully realized portrait of a man suddenly released, a man thrilled with life and living. And as his lover Palomino Cañedo, Luis Alberti gives a comfortable, confident performance.

Recommend? If you are a Greenaway fan, yes...I really liked it. If you are not familiar with his work, there are better films to start with (try "Cook, Thief, Wife, Lover" or "Pillow Book,") but this one certainly has merit! (I can't wait for the Brancusi film...and Greenaway is also planning a film about Hieronymus Bosch! Whoa! Greenaway and Bosch...that seems like a pairing that was meant to be!)