Now it's time for you to meet Martyn Thompson. 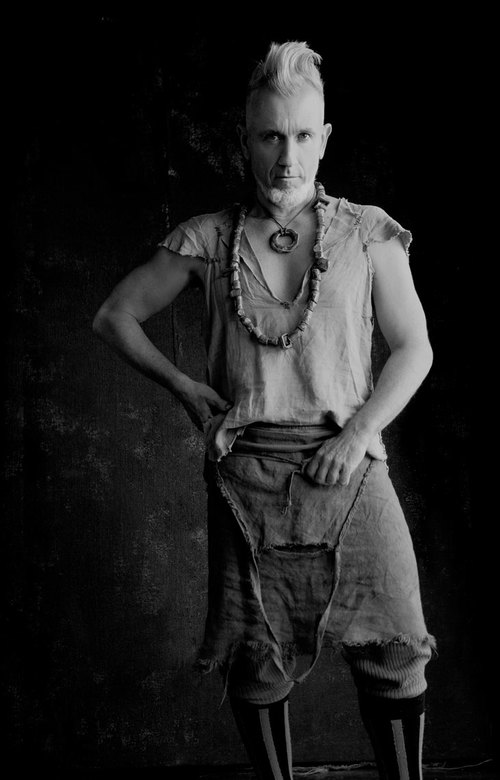 I feel a bit of kinship with Martyn Thompson. Born in England but raised in Sydney, Australia, the teenaged Martyn was very influenced by glam rock, punk, and especially the New Romantics, previously here. In fact, his website bio says, "He was particularly captivated by the aesthetic of Vivienne Westwood and Malcolm McLaren’s subversive early collections and the music of artists such as Siouxsie and the Banshees." Regular readers may recall that I too was entranced with the New Romantics (seen here) as well as Westwood (whom I still adore) and McLaren (and I love a bit of Siouxsie as well, here)!

Thompson began designing clothes just after leaving university in Sydney in the early ’80s. But after photographing his creations, he discovered it was the photographs people truly responded to: moody settings, natural lighting, and a sense of place that went beyond the frame. He decided to try photography and, essentially self-taught, he ended up shooting for Australian fashion magazines! He moved to Paris to further his career and after three years there, decamped for London where his work morphed from fashion to interiors. Finally, in 1999, he moved to New York City where he now lives and runs Martyn Thompson Studio, photographing campaigns for companies like Jo Malone, Tiffany & Co., Gucci, Hyatt, Ralph Lauren, Grey Goose vodka, Hermès, FLOR, and MAC cosmetics, and creating his own textiles and rugs.

I love his utterly unique, patchwork, frayed look: a bit Georgian (if Mr. Darcy had been clothed by gypsies), and a bit Icelandic gnome, with a sprinkling of 70s funk (I'm in love with his chunky platform shoes!). And look at the red Vivienne Westwood squiggle socks below! You go, brother! 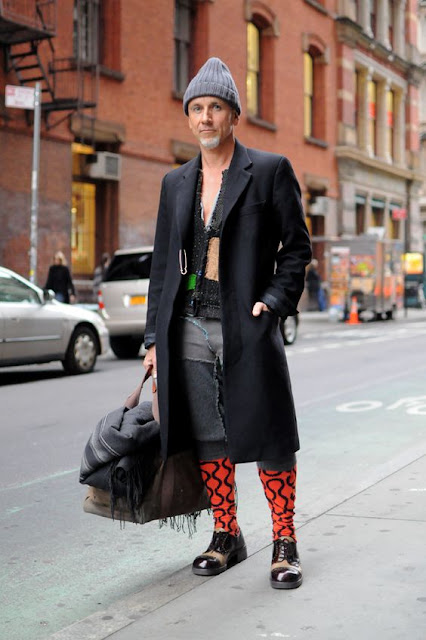 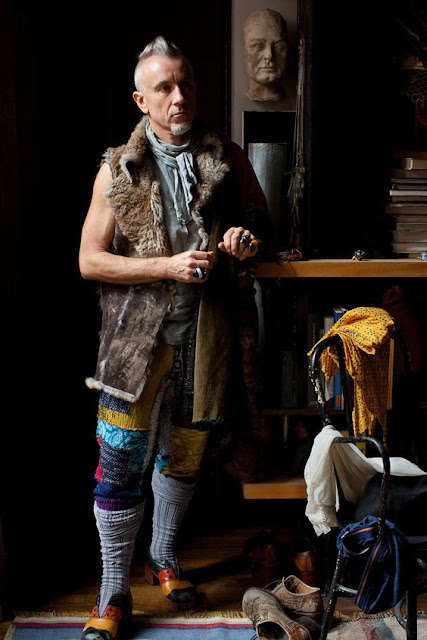 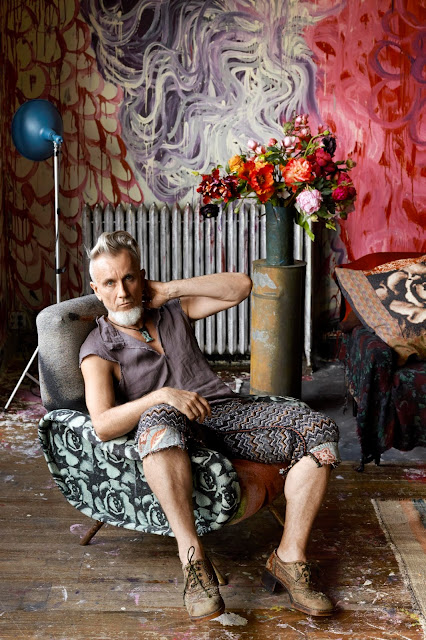 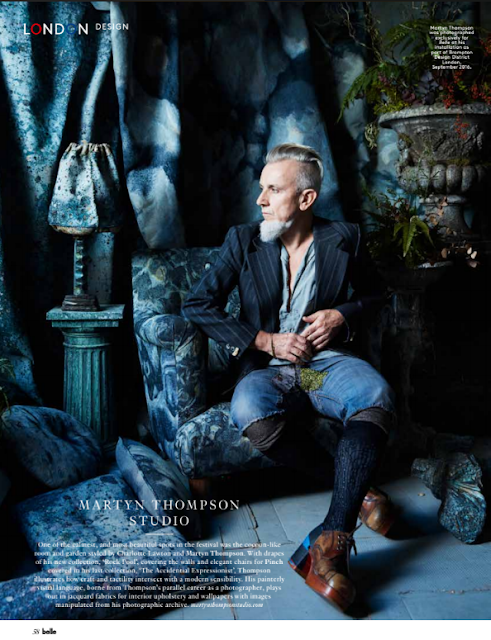 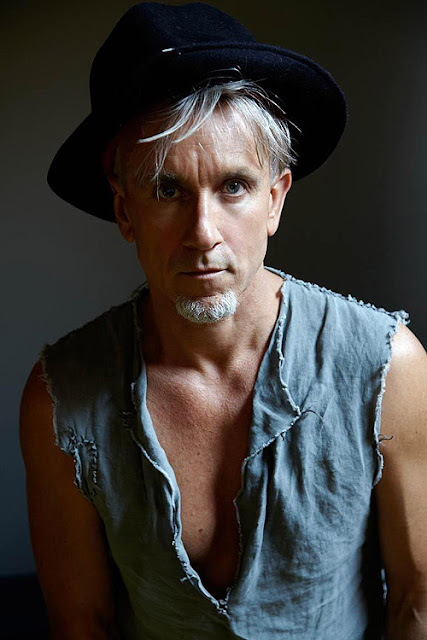 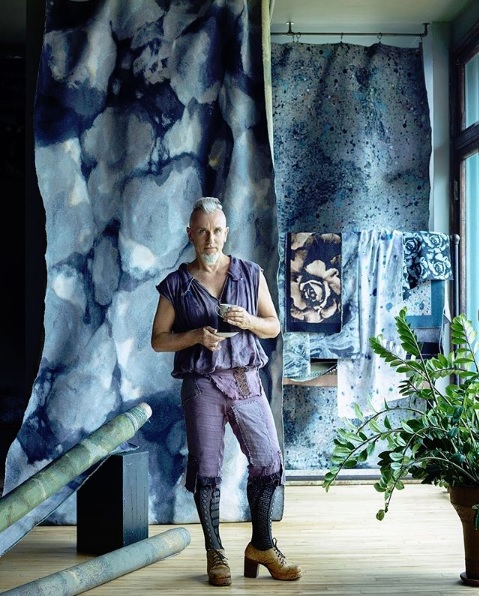 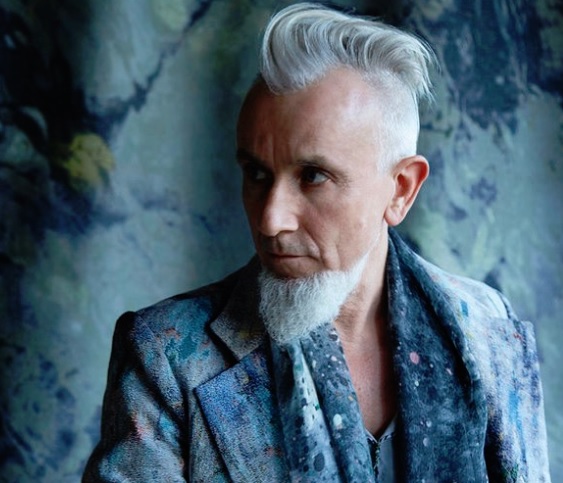 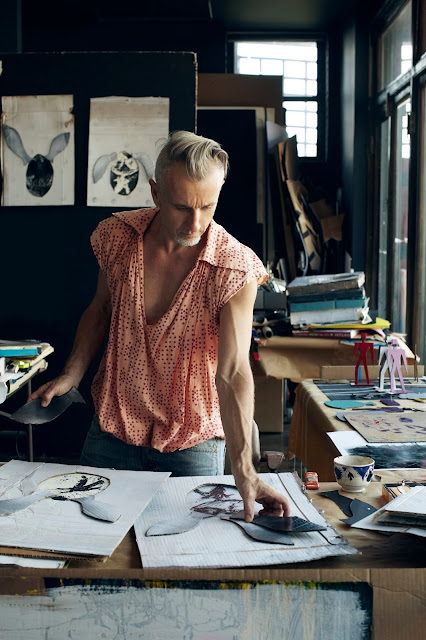 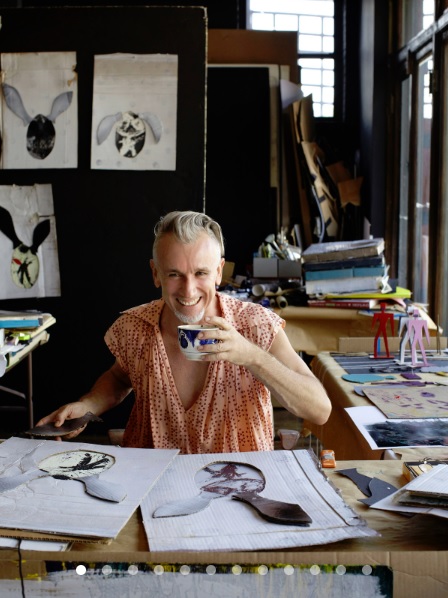 His textiles are fascinating. He created a jacquard fabric (the design is woven into the fabric itself) he calls Rock Pool which looks like a view of rocks just below the surface of a shallow sea... 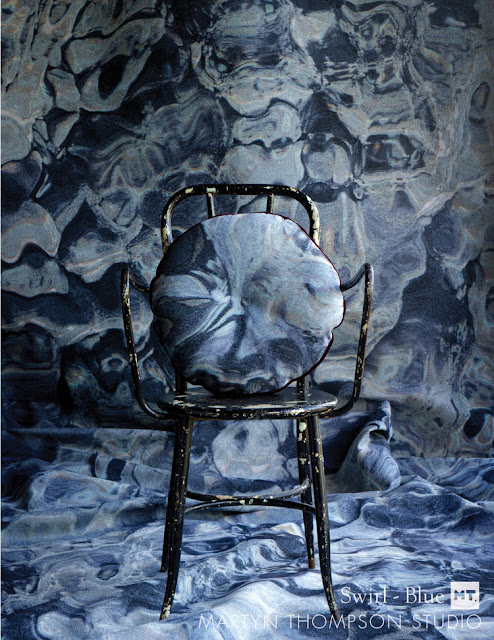 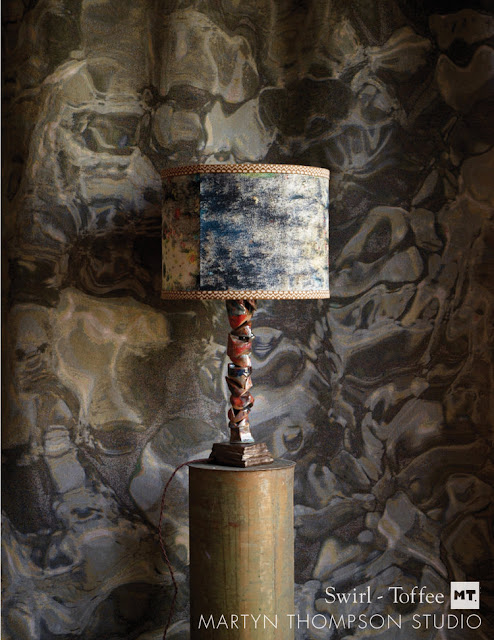 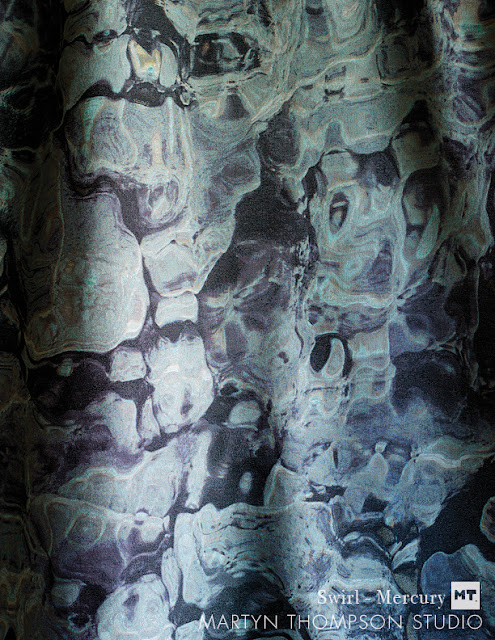 His website shop describes another jacquard, the Accidental Expressionist series:
"Layer upon layer of paint flecks cover this design that beautifully captures the spirit and texture of an artist's drop cloth. The layering of colors gives the fabric a sense of history, a patina developed over time with each new paint speck." 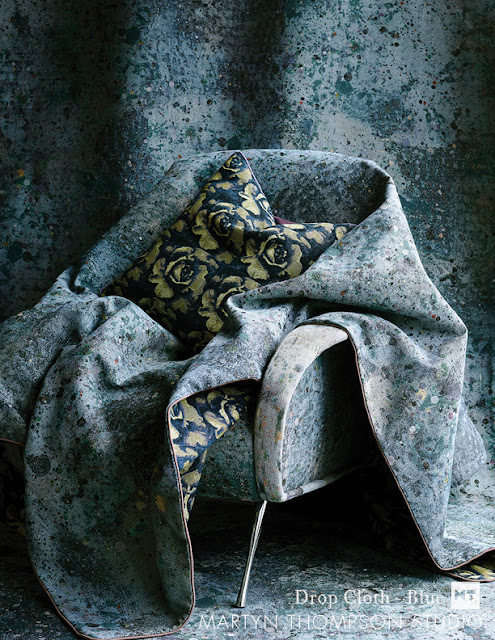 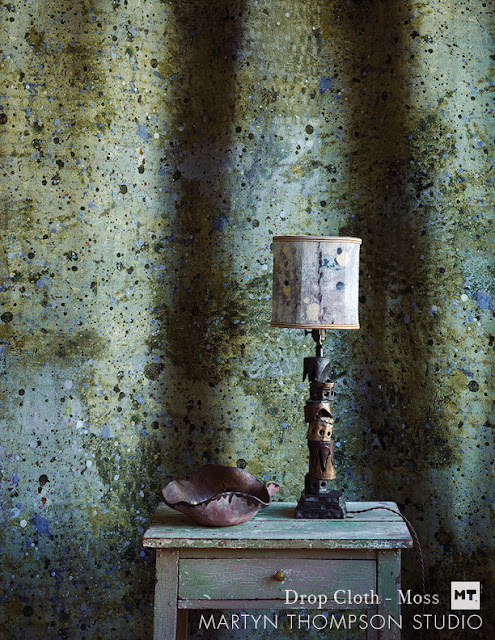 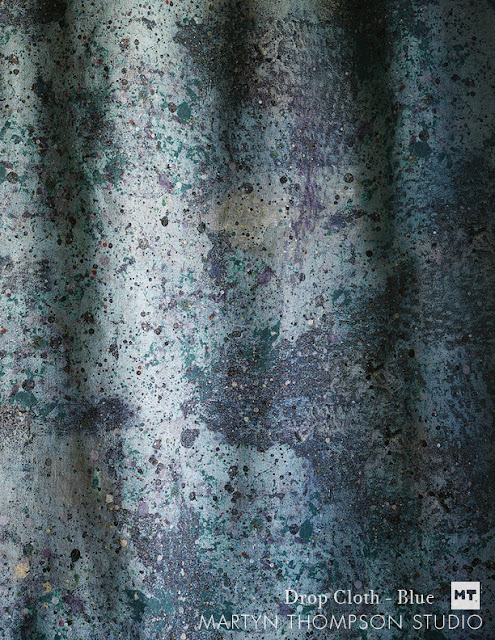 And his floral design Cézanne's Shadow is a tapestry that can be used for pillows, soft goods (one could stitch several together for bedding or drapery), and placed for upholstery. 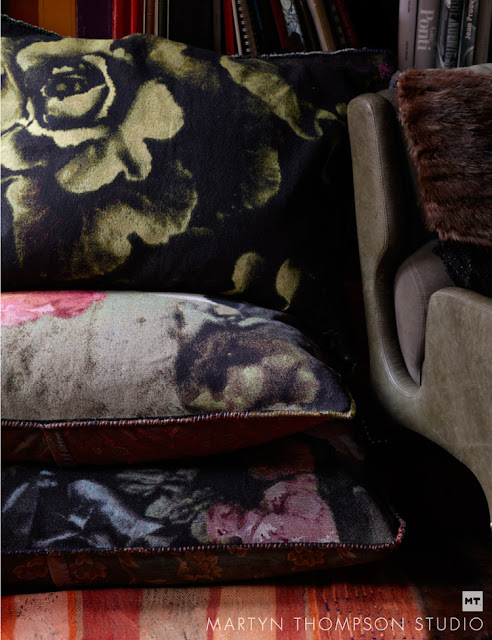 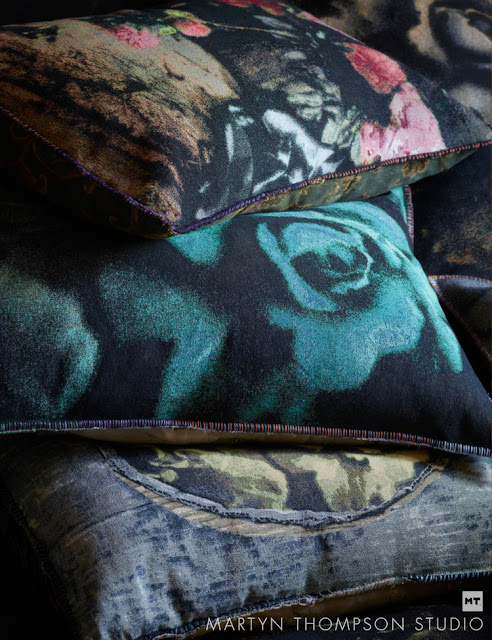 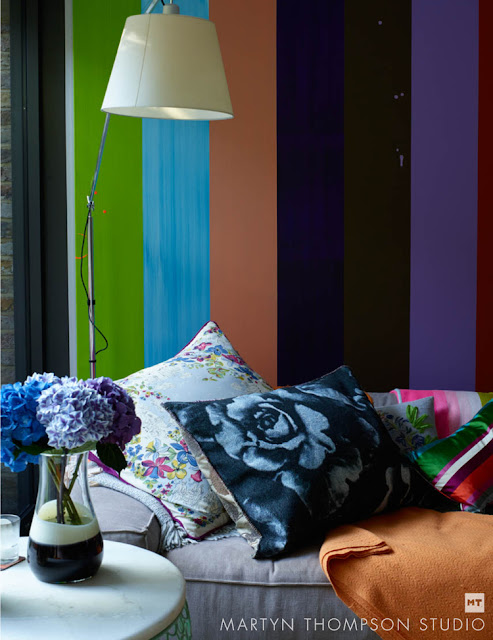 He turned the paint-splatter pattern into a rug for Perennials available here! 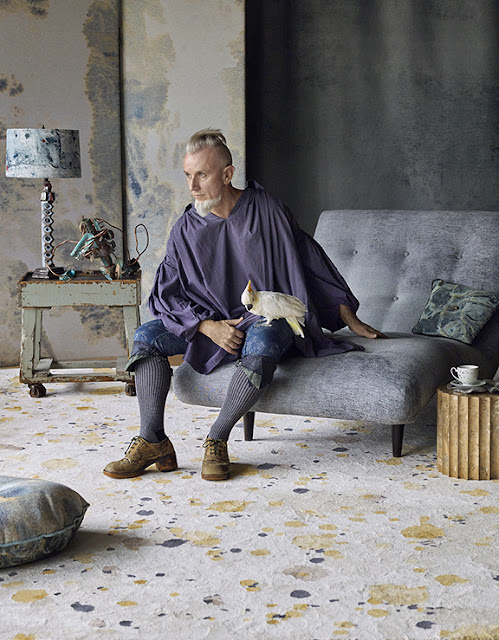 His on-line shop also has a wonderful selection of bags, pillows, blankets and scarves. Take a look!

http://www.martynthompsonstudio.com/
Posted by Jeff at 7:00 AM