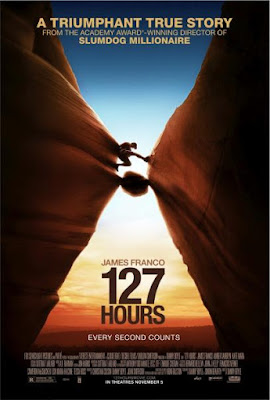 In 2003 hiker enthusiast and amateur canyoneerer Aron Ralston set out to hike around Blue John Canyon in Utah—without telling anyone where he was going. Once there, he slipped and fell into a crevasses, dislodging a boulder on the way down. He survived the fall but found his arm pinned by the wayward boulder. Unable to free himself, he spent the next five days trapped in the crevasses, his water supply dwindling and watching his arm become gangrenous. Finally, in a delirious, desperate attempt, he amputated his own arm to free himself.

Director Danny Boyle (“Trainspotting,” “28 Days Later,” “Slum Dog Millionaire”) filmed Ralston’s harrowing story in 2010. Although the true story is compelling, I frankly wondered how Boyle could manage to make a story about a man trapped for five days in one spot into an interesting film. But he manages that quite nicely. James Franco as Ralston does a magnificent job embodying bravery, delirium, terror, regret, hopelessness, and finally desperation. And Boyle shows the 127 hours Ralston spent trapped as a cavalcade of hallucination and self-examination. In fact, it gets downright existential toward the end, with some lovely and cosmic ideas on the periphery of the immediate visceral action.

In fact, the story reminded me of Kate Bush’s marvelous magnum opus, “The Ninth Wave” which occupies the second half of her “Hounds of Love” release. In it, a solitary young girl ice skating on a lake falls through the ice and spends the last few moments of her life hallucinating, visiting her loved ones who can’t possibly know what she is suffering, imagining her impending death as being tried for witchcraft, visualizing the future she will never have, and finally, and heart-breakingly, leaving her body. While not drowning, Ralston’s protracted journey is portrayed along the same lines.