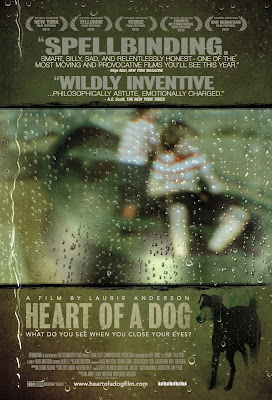 Regular readers know that I have adored extraordinary multi-media artist and musician Laurie Anderson for many years (previously here and here). I was lucky enough to see her groundbreaking, mind-boggling musical and theatrical performance art piece "United States I - IV" when she toured it in 1983 and have seen pretty much every tour and major piece since then. You see, I am also lucky enough to live in Northern California, home to Cal Performances and Stanford, both of whom have commissioned some of Anderson's major works which are, naturally, debuted either at the Zellerbach Hall in Berkeley or at Stanford. I see her every time she is here.

Over the decades, I have seen her performance output and expression pass from film-and-multi-media extravaganza, to alternative/New Wave/rock star, to more reflective story telling. Through it all, she has always been a supreme story teller, but it seems that as she has aged and as her artistic sensibilities have aged, she has settled into the role of cultural historian. Of course her work and performances have always involved astute, pointed, and wry observations about the world in which we live. But as is the case with most artists who have longer careers, her powers have only sharpened, increased. Her performances are now so honed and nuanced that she can make me gasp or wring a tear from my eye with the slightest of vocal inflections. She is simply a master at play.

So I was very excited to see Anderson's newest project, a film entitled "Heart Of A Dog," her first film since her 1986 outing "Home of the Brave" which consisted of concert footage from her Mister Heartbreak Tour in support of her album of the same name.

Despite the shorter running time of 75 minutes, "Heart Of A Dog" feels full and rich. Her work has always had a haunting, captivating sense. She speaks frequently of dreams which is appropriate since her smooth, calm voice and careful, measured delivery can combine to create a sense of dreaming. Experiencing a Laurie Anderson performance is, in a way, to fall under a spell, a sort of waking dream in which her music and stories intermingle, rise and fall, give way to one another, and combine to create something ultimately poignant and sobering that you did not see coming. All of these qualities are at work in this film...and the fact that it is film only serves to enhance the sense of dreaming her performance since cinema is basically like dreaming at night: we sit in the dark, passive witnesses to whatever manifests before us.

"Heart Of A Dog" does consist of stories, passages, and musical pieces from some of Anderson's past performances--I recognized several--but this does not diminish the strength of the film in any way. Many of them are modified to fit the meaning of the work in its entirety. Essentially about love, loss, death, grief, and memory, she uses the loss of her beloved pet rat terrier dog Lolabelle and the more recent loss of her husband, legendary rock musician Lou Reed, as a springboard for a deep, incredibly rewarding and moving exploration of the topic.

The opening music for the film (a lonely song with pluck called "The Lake") sets the tone immediately. As we see a rotoscoped illustrated version of Anderson (all of the animation and illustration in the film is by Anderson herself), we hear her voice say, "This is my dream body. The one I use to walk around...in my dreams." In "From The Air," she muses, "What are days for? To wake us up. To put between the endless nights. What are nights for? To fall through time...into another world." 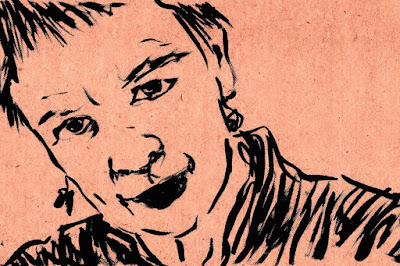 Indeed all of the music in the film--composed and performed on electronics and violin by Anderson--is perfect for not only the visuals but also for the important, spell-binding tapestry she builds. Meditative scenes of bare trees and rain are mixed with archival footage from her childhood and her art work. Peppered throughout are her usual erudite and fascinating references with her quoting such luminaries as Wittgenstein and Kierkegaard.

While she may touch on psychology and philosophy and literature, the core of the film is primary and essential to us all: our relationships to those around us, to those we love. After the death of her sweet Lolabelle, Anderson realizes, "We had learned to love Lola as she loved us...with a tenderness we didn't know we had." 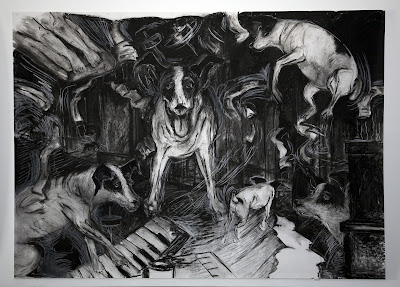 She also realizes how to connect with a kind of universal sense of love at the death of her mother even though the two were never close. She speaks several times of her Buddhist practice, mentioning her teacher and wondering about the Bardo, the realm in Tibetan Buddhism where the dead go after their physical death. Ultimately, she learns that the purpose for death is the release of love.

This touching, poignant film feels like a distillation of everything Anderson has been saying for her entire career. It is a perfect gem, concentrated and powerful. I know Anderson is only 68 and has years to go and will create more beautiful works, but somehow, it feels like a swan song. I mean, where does an artist go from something this wide and encompassing--from life and death itself?

Recommend? YES, although it might be difficult to find a theater that is playing it. Since HBO Documentary Films bought it right before she debuted it at the Venice Film Festival this year (2015), it is my hope that it will air on HBO sometime soon.
If not, the entire soundtrack, music and words, is available on Nonesuch Records and at iTunes.
http://www.nonesuch.com/albums/heart-of-a-dog

http://www.laurieanderson.com/
Posted by Jeff at 7:53 PM