Here are some details from the Fall-Winter '20-'21 shows at Paris Fashion Week I did not want to miss sharing...

Jun Takahashi at Undercover has taken inspiration in the past from films like "A Clockwork Orange" and the cult film "The Warriors" but this collection's inspiration came from Akira Kurosawa's 1957 adaptation of Shakespeare's "Macbeth" called "Throne of Blood." This is the first time Takahashi has made reference to his Japanese heritage and the results are quite lovely. There were some shirts and puffer jackets printed with stills from the Kurosawa film but mostly the looks were interpretations of Samurai armour or Japanese dress rendered in knits and nylon. But it is the combination of color and pattern as well as some of the embellishment that makes these garments stand out...yet each piece as a separate is totally wearable.

The cloud suits designer-cum-conceptual artist Virgil Abloh sent out at Louis Vuitton are fun and light. They feel slightly Dada-esque and psychedelic, like a scene from The Beatles' "Yellow Submarine."

Dries Van Noten made extensive use of faux fox furs in a collection that he said is "about enjoying clothes, dressing: using your sexual power to feel great." The foxes might make one feel foxy, but I really love the platforms, especially the snake pair in the last look below. I know from experience that platforms make one feel sexier...taller, more powerful...and they change your stride into something sexier.

I love a good over-scaled, voluminous scarf like the ones Pierre Maheo showed for Officine Générale: 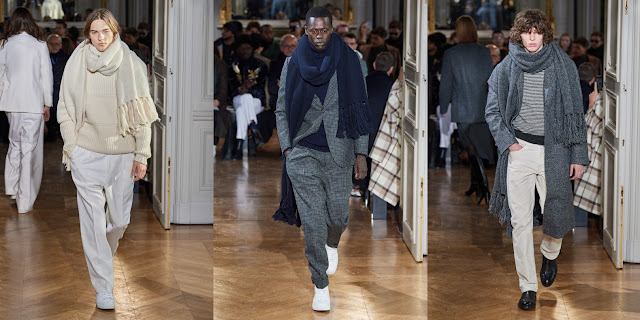 Rei Kawakubo at Comme des Garçons showed a riot of color and pattern in a show that was a swirl of youthful exuberance. "Color resistance—fighting back with color" were the words Kawakubo attached to it, in an emailed post-release. You get what she means: clothes as a mood-enhancing tool in dark times. But there was an unfortunate backlash against the use of cornrow wigs. Cries of cultural appropriation were hurled at the house. The stylist for the show, Julien d’Ys, said his inspiration was the look of an Egyptian prince, like Tutankhamen. See how the wigs are worn low over the hairline, like they are Egyptian headdresses. D'Ys said the hairstyle choice was an homage to something he personally finds beautiful. I see it... 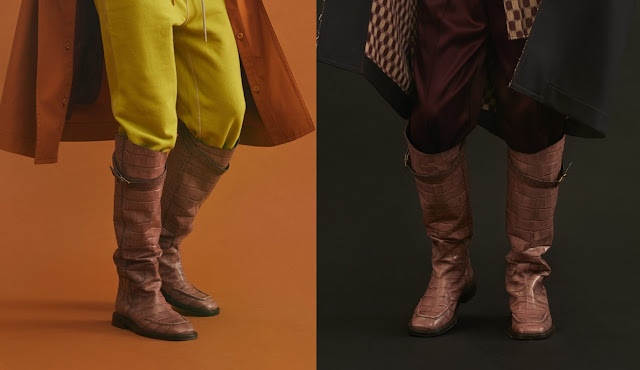 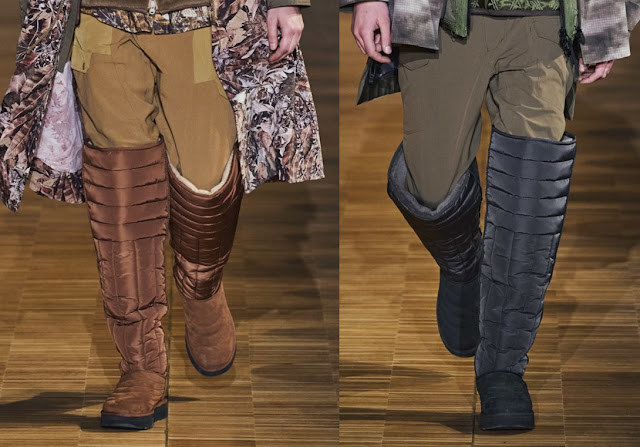 And finally, I always approve of mature and unconventional models on the runway and Junya Watanabe has been an early and consistent proponent of such casting.