It has been my intention for many years now to write an essay called “The Masterpieces of Pop” and explore the songs that I consider to be seminal moments or highlights in pop music. Now, my definition of pop for this exercise is quite broad; it includes music from genres such as country and western, and soul/ R&B. For my purpose here, “pop” means any music, after the start of rock n’ roll, that was “popular.”

My list of songs covers many decades, from the 50s to now. They are not in chronological or alphabetical order. They are not arranged by genre or preference. So with that in mind, I’d like to start with an absolutely haunting song by Roberta Lee Streeter, better known as Bobbie Gentry, called “Ode to Billie Joe.” She wrote and recorded this masterpiece in 1967. With its spare instrumentation—just Gentry on guitar backed by a string section—and Gentry’s measured, plaintive voice, it skyrocketed to number one on the Billboard 100. 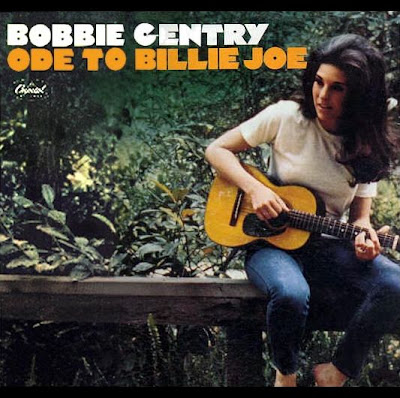 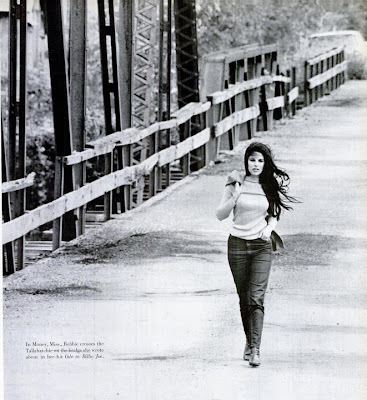 This chilling Southern Gothic song has a literary feel, playing more like a Flannery O’Connor short story or a William Faulkner novel. Indeed, the structure is far less like a pop song of that period and more like prose. The compact story concerns itself with a typical farming family in the southern part of the United States receiving the news of the suicide of a young man in town. They continue on with their normal, daily activities while dispassionately discussing the suicide, thus building a sort of damn against the flood of real emotion that would normally be felt in such a situation. This denial seems to be part of a willful effort to play dumb about any possible connection between the dead young man and the daughter in the family, the narrator of our song. Let’s look at the lyrics.

"It was the third of June,
another sleepy, dusty Delta day.
I was out choppin' cotton
and my brother was balin' hay.
And at dinner time we stopped,
and walked back to the house to eat.
And mama hollered at the back door
'Y'all remember to wipe your feet.'
And then 'I said she got some news this mornin' from Choctaw Ridge.
Today Billie Joe MacAllister jumped off the Tallahatchie Bridge.'

Papa said to mama as he passed around the blackeyed peas,
'Well, Billie Joe never had a lick of sense,
pass the biscuits, please.'
'There's five more acres in the lower forty I've got to plow.'
And Mama said it was shame about Billie Joe, anyhow.
'Seems like nothin' ever comes to no good up on Choctaw Ridge,
and now Billie Joe MacAllister's jumped off the Tallahatchie Bridge.'

And brother said he recollected when he and Tom and Billie Joe
put a frog down my back at the Carroll County picture show.
And wasn't I talkin' to him after church last Sunday night?
'I'll have another piece of apple pie—you know it don't seem right.
I saw him at the sawmill yesterday on Choctaw Ridge,
and now you tell me Billie Joe's jumped off the Tallahatchie Bridge.'

Mama said to me 'Child, what's happened to your appetite?
I've been cookin' all morning and you haven't touched a single bite.
That nice young preacher, Brother Taylor, dropped by today,
Said he'd be pleased to have dinner on Sunday. Oh, by the way…
he said he saw a girl that looked a lot like you up on Choctaw Ridge
and she and Billie Joe was throwin' somethin' off the Tallahatchie Bridge.'

A year has come 'n' gone since we heard the news 'bout Billie Joe.
Brother married Becky Thompson, they bought a store in Tupelo.
There was a virus going 'round, papa caught it and he died last spring,
and now mama doesn't seem to wanna do much of anything.
And me, I spend a lot of time pickin' flowers up on Choctaw Ridge,
and drop them into the muddy water off the Tallahatchie Bridge."

As we can see, secrets and mysteries abound in this family and in this song. And like any good short story, we are given a glimpse into a life or lives other than our own, and it is up to us to make something of it.

It is clear that everyone in the family knew Billie Joe. In such a small rural area, everyone knows everyone. But our narrator knows more than she can say—and possibly more than the rest of her family knows. Why is she so shaken at the news of Billie Joe’s death? Was she talking to him after church recently? And was it actually her that Brother Taylor saw throwing something off the bridge with Billie Joe? And if it was, what did they throw? None of these questions are answered and if they were, the power and brilliance of this song and its narrative would be destroyed. The contrast between and the colliding of the mundane, dreary, disconnected lives of the family and the enigma, the unspoken secrets and grief, gives this song its tension and is the source of its genius. The domesticity hides enormous pain and grief.

Another brilliant contrast is found in the music itself. At the top of the song, we are introduced to the main texture of the song with Gentry’s lazy guitar sound, invoking scenes of sitting on a wooden porch in sweltering heat, drinking lemonade. But that lull is broken immediately by the haunting moan of the strings. Twice in a row they let out a sickening, mournful, keening yet restrained howl, establishing an undertone that lets us know this is no ordinary country song. The strings are effectively the Greek chorus throughout the song, giving us a sense of anguish, of foreboding, even of horror. When we catch up to our narrator a year after the news of Billie Joe’s suicide, we find that a lot has changed in her family. She tells us that he brother got married and moved away, and that her father caught a virus and died. That alone is fairly shocking considering that we live in an age where people do not die from a simple virus. So the two women are left alone, our narrator and her mother. You would think that the common experience of loss might join the two of them together, but we sense that this is not the case. They seem estranged, even more separate then they were before. Our narrator is totally isolated now, and tells us that she spends her time picking flowers on Choctaw Ridge and then dropping them into the river from the bridge where Billie Joe killed himself. As soon as she sings, “…and drop them into the muddy water off the Tallahatchie Bridge,” the strings come in with an eerie, startling whirling sound, a dizzying descending noise that imitates the falling flowers plummeting down to join Billie Joe in the water where he ended his life. And the strings finalize this mystery, closing the book on these lives. Listening to this song is an extremely full, rich experience.

Watch Bobbie Gentry singing a live version of “Ode To Billie Joe” on “The Smothers Brothers Comedy Hour” in 1967. Her guitar playing is perfect, the strings are still there, and her interpretation of the song is nuanced and lovely. She performs in front of a set that shows a kitchen much like the one in which the song takes place, occupied by plaster figures of a mother, father and son… an apt metaphor for the stiffness and denial the family lives in. And at the end of the song, our flesh and blood narrator moves to take her place at the table with her inanimate family… a ghostly act that is a perfect way to visually end the song.

We discussed this a bit already. I remember all of the controversy about this song. Most of my friends thought that she and Billie Joe dropped a baby or a fetus off the bridge, and then Billie Joe killed himself out of guilt. I also love the implied karmic ending that seems to suggest that what goes around comes around (the family is never the same), and also the idea suggested that the family knew somehow. And yet none of this is ever actually said. It's brilliant.