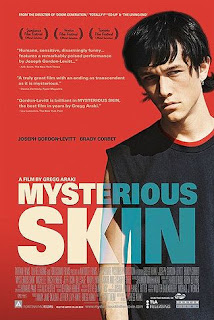 This is another one of those films that has been on my "To See" list since it came out. I have enjoyed Araki films in the past--my favorite is "The Living End"--but there is definitely a sub-par sense to his work, a sense of something approaching the amateur. The kernel of the stories are generally good, but the edges are a little frayed. And the execution leaves a lot to be desired. I don't mind some unevenness in a film... most works of art benefit from having something slightly "off" about them, no matter what form they might take. It makes things interesting. But there is something about Araki films that feel like they should be direct-to-DVD releases.

Thankfully, I did not get that feeling from "Mysterious Skin" and I think it is due, in large part, to the casting. Araki got people whose talents can carry a film, complicated emotions, and a story. Even the support roles felt polished and solid. The biggest kudos go to the amazing Joseph Gordon-Levitt for playing the difficult role of Neil McCormick so expertly and delicately. Another actor could have gotten ham-fisted but Gordon-Levitt infused his character with fragility and a pathos that is necessary for the film to work. He is at times an unlikeable character, but with Gordon-Levitt at the helm, we care deeply for and about him.

When I have written for this blog about films I have seen, I try to set up a bit of information without giving away too much. I believe that films should be seen fresh, and the story should unfold for you, the viewer, the way the director intended for it to be seen. For this reason, especially with this film, I do not want to say too much if you have yet to see it. The pieces of the story should come at you as they do, at the pace in which they happen. Suffice to say that "Mysterious Skin" is based on Scott Heim's 1996 novel of the same name and follows two boys from childhood to adolescence and the different paths they take. It says a lot about childhood, small towns, and the psychological nature of experience and memory. And the highly textural soundtrack by avant-garde pianist and composer Harold Budd and ex-Cocteau Twins musician Robin Guthrie gives the proceedings a floaty, unearthly sound.

Recommend? Yes. It is not an easy film and can be quite heavy at times. But if you can't handle a film that is heavy, what are you gonna do when your life gets heavy? Watch it.
Posted by Jeff at 9:25 PM