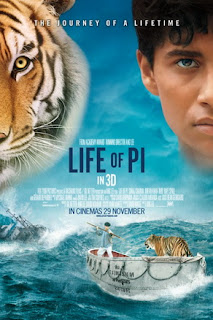 I know I am coming to "Life of Pi" a little late but I must be very careful how I write about this film so as not to ruin it for anyone who, like myself, may not have seen it. I was happy that I had not read any reviews or spoilers so I could digest the film on my own terms. And here are my terms: 1) this is a visually stunning film, absolutely gorgeously filmed and rendered with some perfectly seamless special effects that do not call attention to themselves but instead serve to further the story, 2) the film is expertly crafted thanks to Ang Lee, and masterfully acted thanks to Suraj Sharma in the thoroughly exhausting role of Pi, and finally, 3) no one told me how supremely upsetting, disturbing, and horrifying the film actually is. All of the literature I have read about the film since I have seen it talks about how the film is about religion and god, but I find it is absolutely not about either of those topics. If anything, it is a strong case for atheism. If we really want to talk about how the universe operates, this film is a perfect example of the complete indifference with which it treats all living creatures... and inanimate objects as well, for that matter. "Life of Pi" really addresses the psychological damage that can be inflicted on a person, and how one copes with the damage, specifically the fairy tales we tell ourselves to insulate from harm.

I won't say any more about the plot because anything I want to dissect and disagree with is essential to the pace and unfolding of the story.

Recommend? *sigh* Yes, I guess so. But while it is a pretty movie on the outside, it is not the least pretty on the inside. There is a lot to comprehend once you buy into the premise.
Posted by Jeff at 6:32 PM